Sin squared x means sin x whole squared. There is two sin squared x formulas. One of them is derived from one of the Pythagorean identities and the other is derived from the double angle formula of the cosine function. The former is used in proving various trigonometric identities whereas the latter is widely used in solving the integrals. Let us learn the sin squared x formulas along with derivations and a few solved examples.

What Are Sin Squared x Formulas?

Using one of the trigonometric identities, we have sin2x + cos2x = 1. Subtracting cos2x from both sides, we get sin2x = 1 – cos2x. Thus, one of the sin squared x formulas is,

Using one of the double angle formulas of cosine function, we have cos 2x = 1 – 2 sin2x. If we solve this for sin2x, we get:

Let us see the usage of the sin squared x formulas in the following solved examples.

Answer: The given identity is proved. 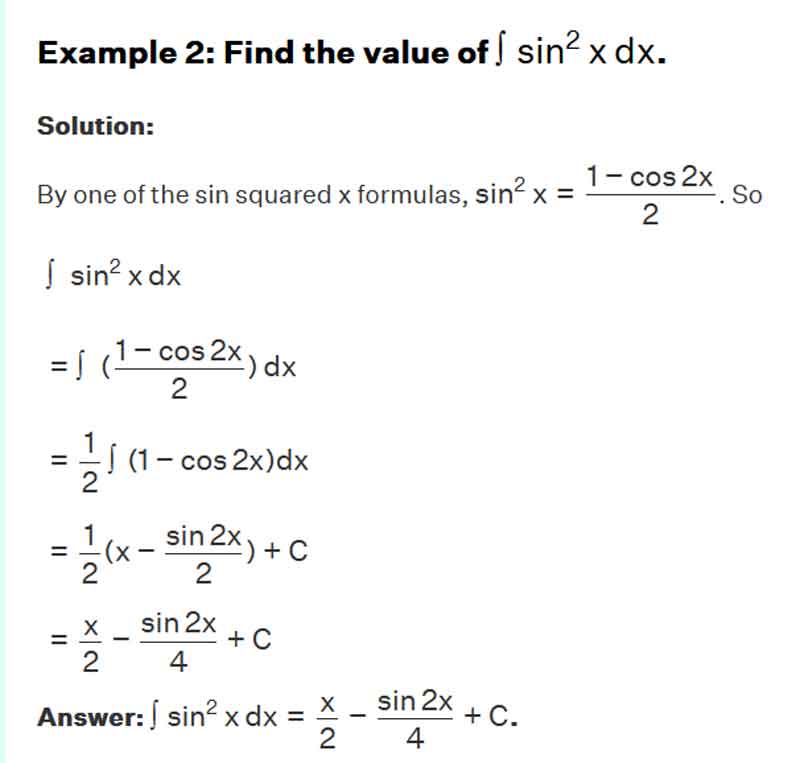 According to a more general definition, an angle is defined to be ‘the amount of revolution that a line undergoes, while revolving about one of its extremities in passing from a fixed initial position to another position.

Derivation: We have studied some identities of trigonometric, One of them is

Let us considered both A and B as X,

Q1. What do You Mean by the Formula of Sin Squared 2x?

Ans: The formula of Sin squared 2X represents a square of the trigonometric ratio Sine of 2X. The angle is doubled and then the sine value has to be determined for a particular value. It will then be squared as the formula suggests.

Q2. Where You Can Use the Formula of 2 Sin Square X?

Ans: You will be able to use the formula of 2 Sin square X wherever needed. It can be used in trigonometric identities and other applications.

Q3. Why Should I Learn How to Determine Trigonometric Ratios?

Ans: Trigonometric ratios are the foundation of trigonometric identities. You will learn new formulas and solve the problems related to them.

Sin squared x is the same as sin x whole squared. The relationship between the angles and the ratio of the sides of a right-angled triangle stated in trigonometric ratios is intriguing to understand. We need to learn about the various trigonometric ratios and their identities to do so. The Sin squared x formula will be explained using these identities. Identity is a mathematical formula that always holds. It’s the same as a = a, x = x, and n = n, and it is as simple as Pythagoras’s theorem for a right triangle, X2 = Y2 + Z2.

What is Sin Squared X Formula?

Trigonometry is a field of higher mathematics concerned with the ratios of triangle sides and their representation in symbols such as sine, cosine, secant, cosecant, tangent, and cotangent. The sides of a right-angled triangle are represented by these symbols in a certain ratio. Sine or Sin is one of these trigonometric ratios. After that, an angle is written to complete the representation of a specific value of a two-sided ratio.

The ratio will become Sin 2X if the angle is 2X. When it is squared, the result is different and can be represented as follows.

Examine and comprehend the difference between the square of an angle’s sine and the same of an angle multiplied by two. Learn how to appropriately represent these equations so that we can solve trigonometric problems in the exercise and on the tests without getting confused.

By using trigonometric identities, we know that,

Sin2x = 1 – Cos2x is obtained by subtracting Cos2x from both sides. As a result, one of the sin squared x formulas is as follows:

Cos 2x = 1 – 2 Sin2x is one of the double angle formulas for the cosine function. When we solve this for Sin2x, we get the following:

The following are the conditions that should be satisfied for a Sin squared x formula.

This function appears to be a skewed and compressed sine or cosine wave.

Because the square of a negative number is always positive, the value of x must be non-negative. It cannot be more than 1 because sin  x  is always between -1 and 1.

Ans: We know that,

Ans: Here, we are going to use the formula x= 1-x to prove this equation.

Ans: This equation can be written as,

Ques. What is a sinusoidal graph, exactly? Is it only sine waves? Or are cosine, tangent, secant, and other sine-like functions also considered sinusoidal? (3 marks)

Ans: A sinusoidal graph is a stretched or squeezed sine wave that has been moved. Cosines are automatically included because they are simply a shifted sine. Sinusoidal graphs do not exist for tangents and secants.

Here are some examples of sinusoidal graphs, often known as sine waves:

Ques. What is the definition of a unit circle? (3 marks)

Ans: A unit circle is a circle of radius one that is centred at the origin (0, 0) in the Cartesian coordinate system in trigonometry.

A circle with a radius of one is known as a unit circle.

Make an angle of with the positive half of the x-axis by intersecting a line through the origin with the unit circle. Cos(θ) and sin(θ) are the x- and y-coordinates of this point of intersection, respectively. Because the length of the hypotenuse of the unit circle is always 1, this definition is consistent with the right-angled triangle definition of sine and cosine when 0°< θ < 90°.

Ans: Discrete sine transform is a term that refers to a transformation that is not continuous.

There is a family of transforms made up of sine and sine hyperbolic functions. The natural vibration of thin square plates with varying boundary conditions is used to create these transforms.

Ques. What is Euler’s Formula? (3 marks)

Ans: Euler’s formula is a complex analysis mathematical formula that provides the essential link between trigonometric functions and complex exponential functions. It is named after Leonhard Euler. According to Euler’s formula, for each real number x:

where e is the natural logarithm’s base, I is the imaginary unit, and cos and sin are the trigonometric functions, respectively, cosine and sine. cis x is a term used to describe a complex exponential function (“cosine plus I sine”). If x is a complex number, the formula remains valid, and some authors refer to the more general complex version as Euler’s formula.